Hit the ball. Score goals. On multiple fields at the same time.

Accidentally own goaled somewhere? You'll have to live with the consequences ...

It's a very small, very simple game, for some chaotic local multiplayer fun.

A game for 1-6 players on keyboard/gamepad. (Solo mode against bots.)

All you do is move around. If you press "up" (for example), your character goes up in all fields.

Walk into the ball to move it. A normal goal gives you 1 point. But if you were the last one to touch the ball, and it goes in your goal, the opponent gets 10 points.

When someone own goals, a field is removed or added. Teleports allow travel between these fields ... but using one might also trigger a powerup. Which can be really good or really bad for you.

This game was made with Godot Engine 4 (beta). (Yes, the upcoming version that's not stable yet, I did it to learn what's new and help test it.)

The font is Rubik Mono One, available on Google Fonts.

Soundtrack was made using the Song Maker website, creating a few melodies of equal length/BPM and randomly overlaying them in the game.

Everything else is mine and made in 3 days.

You can read about all that in the [Devlog] Own Goals Not Allowed.

As always, I'm open to bug fixes, ideas, improvements. If they don't take longer than the time spent on the original game :p

P (or START) pauses the game.

Yes, the game title is incorrect, as own goals are in fact allowed. They're just not a good idea.

But "Own Goals Purposely Discouraged Through Game Mechanics" just doesn't have the same ring to it, does it?

Team colors are randomized when the game loads. If you don't like a color scheme, restart the game. Same with team composition.

At the start of development, I only had "soccer, but on multiple fields simultaneously, and accidental own goals are disastrous" to go on, and this is what came out. 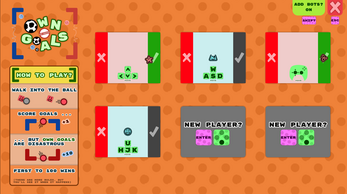 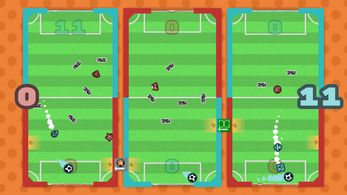 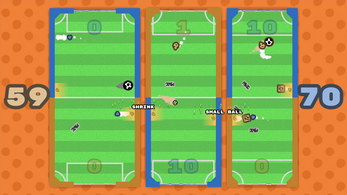 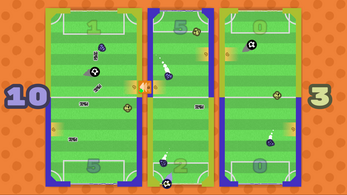 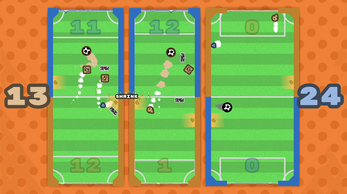