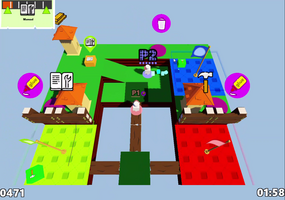 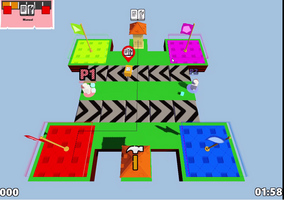 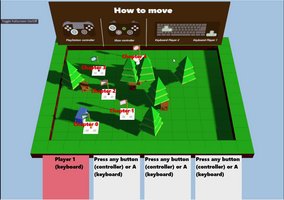 I'm really happy this update is out and my playtesters seem to like the game more and more. A lot has changed and improved since last version, because I found that some parts of the game just weren't working or "good enough". To be honest: I was quite frustrated at times. But after lots of experimentation and iteration, I think I've found the right vision for the game and feel like this could become a really fun game!

In this update, you'll find a functioning campaign screen, the start of a small story, and five levels (of which the first is a tutorial to teach you how moving works and where deliveries need to be ... delivered.)

General additions:
*  Reworked the whole campaign/game plan (which is why I redid the first levels) and mapped out most of the first few worlds
*  Because of this, I changed the tutorial sprites to make the game even more simple and easy to pick up. (I only needed to explain "jumping" and "deliveries" in the first world now)
*  Added full support for navigation (delivery timers now calculate the shortest distance their package needs to travel on the map, and use that to create a challenging timer for the players)
* This includes the terrain, but also other objects we can walk on ("WalkableFloors") and objects that work as obstacles ("BlockableFences" - I don't know why, it's just memorable to me), and special navigation types (via interactive elements, like trampolines)
*  Made swinging bridges dynamic (their length can be set from the editor)
*  Added campaign screen (you control a car driving around, to select which level you want to play)
*  Improved campaign screen: timer on level selection, better vehicle control, minor stuff really
* Scrap that, major stuff :p The game now automatically saves your scores and keeps track of where you are. There's also a nice pop-up animation when a new level is unlocked. And if it's your first look into a world, it displays the corresponding story element.
*  Made the "input screen" an overlay that is present both in the campaign and level screen. (The "input screen" is where you can log in your players and their corresponding controller/keyboard controls)
*  Added some animations and more visual clarity to the GUI (like the score text growing bigger and becoming green when your score increased!)
*  Created two different types of trampolines, improved their algorithm (made it more consistent/predictable), and gave them some extra settings
*  Added multiple looks for the dropzones and pickup zones.
*  Improved player physics again ... and again.
*  Made stuff reset to their original position if you (accidentally) throw it off the field.
*  Added lots of feedback on the deliveries: how much reward/penalty you get, if you dropped a package at the wrong destination, if a package is in overtime, if a package is a special delivery, if a package is starting to run out of time (flashing red animation), ...
*  Moved/changed some GUI elements to make everything a bit easier to see and navigate. (Nowhere near a beautiful and fully functioning GUI yet, though.)
*  Implemented proper package scoring (based on distance traveled, time left, etc.)
*  Added simple player animations and particle effects, just to make everything look a bit nicer and try some styles.
*  Changed dropzones to flags that wave in the wind
*  Added modifiers and conveyor belts

*  Playtested a lot, which led to better controls and easier gameplay. (Less friction on player, more angular damping on packages, giving the player a completely cubic body, larger trampolines with more consistent behaviour, some hints to solutions of puzzles, and more.)

Bug fixes:
*  Fixed "(controller)" not displaying in selection screen
*  Fixed tutorial crashing when a package was just deleted
*  Increased size of player "selection" area, so packages are easier to catch/select
*  Fixed bug that, in rare cases, made a delivery pause forever
*  Fixed bug with hover sprite still showing if you've fallen off the field
*  Made it impossible for both player characters to be disabled in solo mode (it happened to me once, and I'm still not sure why, but I just made the code more stable and it never happened again)
*  Fixed bug where the game would always restart to level 1
*  Fixed bug where timer stopped at 1 second, instead of 0 seconds.
*  Fixed a hilarious bug where you could mount multiple animals at the same time.
*  Fixed a bug where packages spawned into the ground, or too close to the package machine.
*  Fixed a bug with rotation causing an "NaN position", which crashed the game or glitched the camera.

I probably missed some changes, because I'm still getting used to keeping a changelog. But I think this is a fair representation of all the work that was done and everything that was changed.

Anyway, I hope you try the game and have lots of fun with the new levels!

(The next version will probably take a few weeks. I need to implement one huge system: allowing packages to consist of multiple parts. And I aim to add 3-5 complete and tested levels for each major update.)

(Also, I will soon write a devlog explaining all the techniques/systems I tried the last few weeks and why they failed. I think it's even more interesting to share failures and systems that didn't work, than only talk about the thing that does work. I really learned a lot from it.)