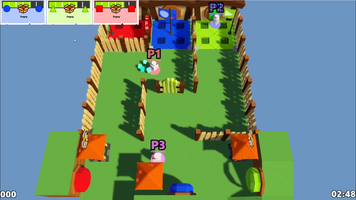 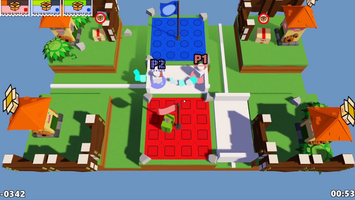 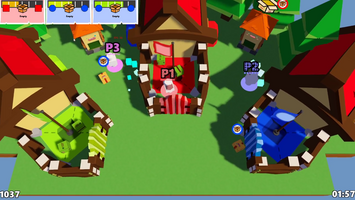 The moment has arrived! The moment you've all been waiting for!

IMPORTANT: If you've downloaded and played an earlier version (before v0.3), you must clear your save file, otherwise it will think you already completed all these levels :p Go to Settings and click Clear Save File to do so.

Watch this trailer to see some levels and gameplay:

This release means a lot to me. I think the game improved tremendously since last release, and I have a much clearer path into the future.

I sincerely hope you try the free demo, or even support me and the game, and have a great time. If you have any feedback, suggestions, bug reports, just let me know.

Because the holidays are around the corner, development will slow down a bit over the coming month, and it might take 1.5-2 months before version 0.4 hits. This version should have all the levels for world 2 and world 3 (which is twenty new levels).

General additions
*  Completely rewrote the delivery system to make it faster/more efficient, but most of all to make it support all sorts of packages (multiple components, labeling your own destination, gift wrapping modifier, etc.)
*  Had to retest and tweak some things from the older levels to make it work with the new system, but nothing major
*  Decided to deprecate support for splitscreen/multiple cameras. After lots of testing, I figured that playing with the camera zooming/distance and angle should allow us to see the whole level, even on the larger levels. As such, splitscreen isn't needed. I was happy to remove it: code became much cleaner and faster
*  Another HUGE benefit from removing splitscreen, was that I know use a single viewport (the root viewport) for all scenes, which means I can adjust settings in one place (such as anti-aliasing and render quality), and it will look the same throughout the game
*  Added new icons for all deliveries/components
*  Removed the shader from dropzones to create a "jumping stones" animation, which just looks much nicer and doesn't feel so out of place
*  Optimized the GUI system (especially the part about hiding it when a player is behind it)
*  Rewrote the system for connecting buttons with their corresponding interactive objects => much cleaner code, more efficient, and more flexible
*  Added many more feedback messages for when things go right/wrong (especially when it impacts score)
*  Created the labeling zone: set the color, press the button, and all packages underneath it have their destination labeled
*  Created the general component zone: place a package on the zone, wait until the timer is done (10 seconds on average), and a new component is added to the package!

*  Made proper visuals for the Gridmap and some other components. (This also includes redoing some of the models, texturing, and techniques used (such as ambient occlusion). I just learned so much more the past few weeks!)
*  Decided to use the Gridmap for all static objects ... then did some more experiments and decided to exact opposite :p Gridmap is only for the static terrain. *  This allowed me to write a shader that only hides the part of the object that occludes a player, instead of hiding the whole object whenever a player is standing behind it. It looks much better, is less intrusive, AND allows me to create big connected meshes without problems.
*  Added some texture to the packages. Also optimized the system by using object pooling (instead of creating/destroying packages all the time, I just start with 15 or so packages, and enable/disable them when needed). I used the same thing on many interface systems (because we're re-using graphics, buttons, text, etc. all the time anyway)

*  Changed modifier system: modifiers wear off automatically after a certain period of time (instead of requiring the "garbage bin" modifier to remove them), also created slightly more visible modifier icons and zones (still not happy with it; certainly not the final design)
*  Messed around with the camera again: tried to make zooming in/out more smooth and less annoying, also tried to make GUI hiding/showing (top left) more fluid. Succeeded somewhat, not completely
*  Fixed many small bugs and inaccuracies
*  Created gates (that can be opened with a button)
*  Created three different button types: general (usually connected with a gate or something), pressure (to start creating a package), labeling. *  Created some new assets (house, skyscraper, lamp post, new fences, etc.) Already starts to make the game look a bit better.
*  Added tutorial mode back in (mostly because it needs to explain solo mode; not really needed for anything else)

*  (Will need to do optimizations on the create_delivery() function in the future. It does SO MANY THINGS, which causes it to lag sometimes if the game is also busy with something else. Better to optimize code itself and split into multiple functions called over multiple frames.)

*  Made packages and players a little easier to control and get out of tight situations. Packages bounce more (off of walls), kicking them is stronger and more controlled, main player physics body is a capsule now (although it still uses a cube for package kicking, because it's by far the best)
*  Added basic statistics tracking (like "number of deliveries failed", "number of player deaths", etc.). Will do more advanced, individual tracking in the future.
*  Did many playtests, which mostly caused me to simplify levels and explain mechanics in a slightly better way.

*  After even MORE playtesting, I decided to create a tutorial world. This world has three short and simple levels. Each explains one mechanic necessary for the game (like "this is a package, deliver it to its destination") with a short video tutorial at the start. Any mechanic that is not explained yet, is hidden/disabled, so you can't even get distracted by it. You are also automatically made "sticky": you only need to walk against a package to make it stick to your body, so you can transport it easily. (After a few levels, this automatic stickiness disappears, all basic mechanics are explained, and we return to the old levels I already created)
*  Also made lots of things more visually clear: the interface (which button to push, depending on your controller), the colors and shapes on the packages and destinations, and even more stuff.
*  Campaign screen now has a nice fog, and there are portals (with an animation to make them appear/disappear) that signal the change between different books. Started with general layout of campaign screen anyway => will be filled with more assets/details as the number of levels grows.

*  Added main menu (including working settings). Doesn't look very amazing atm, but it's not a priority to fix that.
*  Added an extra background song and made sure songs keep playing when switching scenes (and they don't play when game is paused, for any reason)

Bug fixes:
*  MANY BUG FIXES. I should learn to keep track of those as well in a changelog.
*  When a delivery is added, it now rechecks all existing zones to see if any unused packages are laying there that fit the delivery
*  Fixed a bug with the wrong color packages being created.
*  Fixed manys bugs where packages wouldn't properly reset (they still thought they were pending delivery, or their friction was zero which caused them to slide like the ground was ice, that kind of stuff)
*  Fixed some visual inaccuracies (color mismatch, things showing that should be hidden and vice versa)
*  Updated interface => still doesn't look great, but now I can more easily customize interface for different situations/screen resolutions
*  Fixed a bug (or so it seems ...) where players could get stuck in the ground if they used a trampoline. Enabled "smooth trimesh collision" in physics settings, and bumped physics FPS up to 120. Will see if performance holds up (and if this actually fixes it - Godot physics can be ... weird)
*  Fixed bug where the system would be messed up if you received a modifier while you already had one
*  Some code restructuring and performance optimizations => still have a long way to go, if performance on my 10-year old iMac is anything to go by