Welcome to the twenty-first devlog!

There are quite a lot of games that use “fixed” input schemes. These games say: “keyboard players are ALWAYS the first and second player – if there are controllers, they will be pushed to another spot when a keyboard logs in”

I think this is way too rigid and would only make the code very messy.

I decided to allow devices to be activated in ANY order and belong to ANY player. Fortunately for me, this was easier than I thought :p

Godot works with an “Input Map”. You can create a certain action (like “jump”), and then assign keys/controller buttons/whatever to this action.

HOWEVER, you can only assign a certain action to a single specific device, or to all devices.

For example, if I want to allow any player to restart the level, I can just say:

The whole idea of controllers, however, is that everyone controls their own individual character. As such, I need to create a unique action for each device.

For the first controller, for example, I need to do this:

For the second, I need to create the action “jump1”, and so forth.

It was roughly 20-30 minutes of boring work to create all these actions and link them to the right buttons, but then it worked flawlessly. 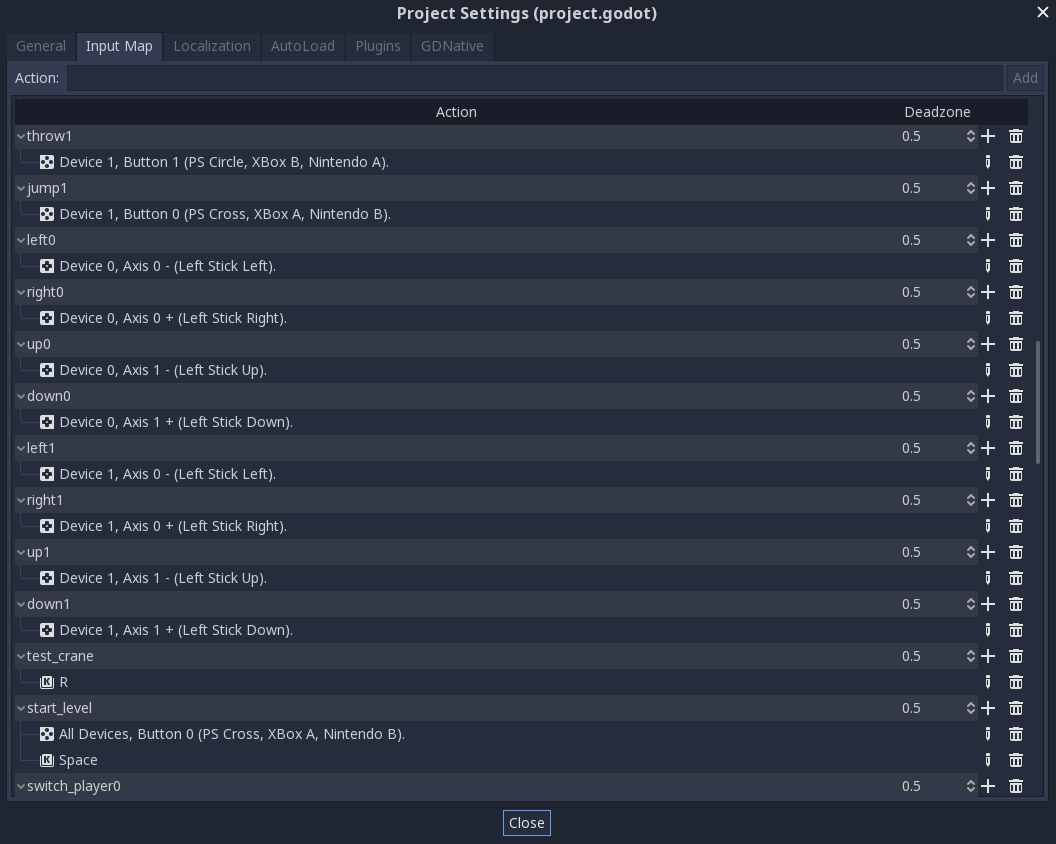 A screenshot of (part) of my Input Map.

Device 0 … might not actually be the first controller you plugged in. The devices are ordered by the system itself, and you might be playing with device 1 and device 4, just because the system has decided to assign those IDs.

For this, I created a global variable (accessible in all scenes) called control_map.

This is basically all the code that's needed to connect the right device with the right player. (Note that the action list is not complete - it's only the actions that have currently been implemented. ):

The variable `control_table` is a dictionary saved on the player itself. This loop simply adds the device number to the end of each action string, so anytime we ask the program to check for e.g. jumping, it automatically checks "jump0" for the first player, "jump1" for second, etc.

Checking for input in Godot is as simple as `Input.is_action_pressed(<name of action here>)`  There's also `is_action_released` and `is_action_just_released`, if you need it.

This works great. But … only for controllers. How do we add keyboard players?

As you might have noticed: the device numbers are always POSITIVE. The computer will never say: “this controller is device -1”

So I added some more actions to the input map, like “jump-1” and “jump-2”, and all the other actions.

And that’s all that was needed to allow keyboards to work! The order of the devices, or their ID, doesn’t matter at all. The control_map converts them when needed, and that’s all there is to it.

At first, I thought about allowing players to log in or leave during a level. Then I realized this was a really stupid idea: levels are only a few minutes and can change based on player count. Why would I need to allow players to be added or removed at any time?

So, controllers can be logged in during the campaign screen and level select screen, and not during a level (or at the game over screen).

In my experience, however, this was always just a nuisance. I’ve never had to consciously log out a controller (why would you?), but I’ve accidentally logged myself out MANY times. That’s why I’m currently not supporting that system. Of course, it might change later.

A bit of a boring devlog, without pictures or nice videos of level design. Nevertheless, I hope you learned something from it! It took me some time to figure out the Godot input system, as it has its quirks, but now that I understand it you can actually make things work pretty easily.